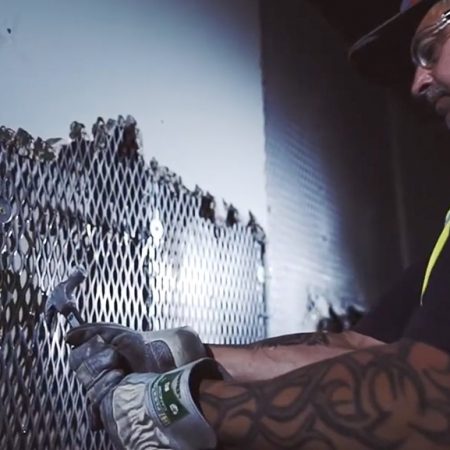 We recently launched a new film to showcase our ExMesh™ Securilath™ product, which is now the only security mesh range to be certified by the Loss Prevention Certification Board (LPCB) when applied to metal stud, timber stud and block walls.

The film was produced by Middlesbrough-based Ithica Films – who we have worked with on a range of projects – and features stunning animations from another Middlesbrough-based company, Animmersion, who recently supported us in creating a visualisation tool for our full expanded metal range.

Highlighting Securilath™’s ability to resist determined attack and prevent forced entry into a building, the film illustrates the product’s many benefits for the construction and security sectors.

Philip Astley, managing director of The Expanded Metal Company, said: “Having worked with the talented teams at Ithica Films and Animmersion in the past, we knew that they were capable of creating a high impact, engaging film which would demonstrate Securilath™’s qualities and effectively convey technical information to contractors and end users.

“We’re absolutely delighted with the results and it’s fantastic that we can draw on exceptional film making and digital expertise so close to our Hartlepool HQ.

“We’re all pioneering companies in our own right and this film showcases our innovative approaches to a global marketplace.”

Matt McGough, managing director of Ithica Films, commented: “We’ve been working with The Expanded Metal Company since 2017 and it’s been great to work with people who are interested in collaborating with digital companies.

“They’ve given us a lot of freedom to come up with concepts that make their work stand out and they’ve put a lot of stock in the ideas we bring to the table.

“Bringing together ourselves and our 3D animation partner Animmersion has really helped us show their products and innovations to an international audience in a very modern way.”

Samuel Harrison, managing director of Animmersion, added: “We always relish the opportunity of working on creative digital projects in the North East. Working with Ithica Films and The Expanded Metal Company on this project was a pleasure as always and we are delighted that we were able to bring a little digital magic with creative storytelling to The Expanded Metal Company’s innovative products.

“It’s fantastic that The Expanded Metal Company embraces digital technology and creativity as it does and seeks to lead the way, taking the sector forward at every step.”